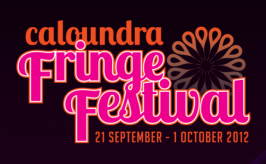 The Caloundra Fringe Festival is proving to be a great partner for its parent, the Caloundra Music Festival.

At a media launch today, Mayor Mark Jamieson said both festivals would put the spotlight on Caloundra for more than a week in the peak holiday season.

“The Fringe Festival programs are now available, and I think people will be amazed at just how much is being packed into this inaugural festival,” he said.

“And this year, with all three eastern states enjoying their spring school holidays in the same fortnight – with the new public holiday falling smack in the middle of that fortnight – we expect record crowds.”

Divisional councillor, Tim Dwyer, said the Fringe Festival was shaping up to be a fantastic community event.

“A large number of local businesses and community groups are making this a really inclusive event,” he said.

“It starts on the evening of Friday 21 September at 6pm which also marks the beginning of the spring school holidays.

“The Fringe will be launched with performances from Peter Cupples of the 70s band Stylus.

“A street parade will travel along Burgess Street, down De Vene Avenue and finish at the Surf Stage in Lions Park, and a firework display will also take place that night.”

Through the week the Busking Festival will be run, as well as plenty of street theatre between Happy Valley and the Esplanade – and carnival rides will operate at Happy Valley.

“There will also be a free festival train during the Music Festival days which will take you from Happy Valley to Lions Park, weaving its way along the coastline,” Cr Dwyer said.

“And Rumba Resort’s Night Carnivale lights up from 6pm to 9pm nightly where you can grab a bite and a drink and join the fun. The Carnivale’s activities will include glow twirling workshops, drumming, busking and street art.

“During the days there will also be free training on kite-surfing and paddle-boarding at the water’s edge,” he said.

“It will go further afield this year, out to Bellvista and Meridan, looping round to take in Moffat Beach,” he said.

“It will allow locals to leave their cars at home and enjoy a drink in safety.”

More information on the Caloundra Fringe and Caloundra Music Festivals can be found at www.caloundramusicfestival.com.

What do you like about Beerwah, or its adjoining centres for that matter, but this article is about Beerwah, and particularly what it … END_OF_DOCUMENT_TOKEN_TO_BE_REPLACED

Milan and Himanshu have  been visiting me since February, and have finally convinced me to sign up to Solar Energy. I don't rush into … END_OF_DOCUMENT_TOKEN_TO_BE_REPLACED

Meet Teghan from Peachester who is doing some great things in the Performing Arts in Peachester and in the Glass House Mountains, … END_OF_DOCUMENT_TOKEN_TO_BE_REPLACED

Local triathlete Damien Collins is set for an age group win at the 2015 Hawaiian Ironman Triathlon. Damien is a 'local hero' and … END_OF_DOCUMENT_TOKEN_TO_BE_REPLACED

Graig is often complemented by shoppers about the quality of his bread which is handmade, "the old fashion way like I was taught many … END_OF_DOCUMENT_TOKEN_TO_BE_REPLACED

Beerwah.com is always looking for new and fresh content. … END_OF_DOCUMENT_TOKEN_TO_BE_REPLACED

For all of our followers who run local businesses:  Your … END_OF_DOCUMENT_TOKEN_TO_BE_REPLACED