You are here: Home / Articles / A Tribute to Victor Donald Smith: A Pioneer of Beerwah – RIP

On this day 33 years ago a Pioneer of Beerwah passed away. His name was Victor Donald Smith. His was a vital part of Beerwah’s history and contributed to Beerwah’s growth and prosperity. Missed by the grandchildren of this man, Kathleen Evan (Smith) & Diane Paes (Smith). Never forgotten, Always Loved. R.I.P. Pop Smith 02-01-1901 – 21-07-1982

The attached newspaper clipping reads as follows: The death of Victor Donald Smith, aged 81 years, in Maleny Hospital came as a shock to his family and a wide circle of Beerwah friends.

Born at Strathpine and educated at the Albany Creek State School, the late Victor Smith went to settle in Beerwah in 1924 and remained there until his death.

As a young man he worked in the timber industry for the Simpson family. His interest in horses encouraged him to take over a horse team hauling logs from Peachester to the Beerwah sawmill. Two such trips was a daily routine.

His services as a blacksmith was regularly called upon to shoe horses,and hand make chains of all sizes for the trimesters.

Later he worked in the Beerwah sawmill at various jobs, and served under manager Gordon Palmer, a well-known Beerwah resident.

Joining the A.I.F. Vic Smith saw active war service in New Guinea, and after four years in the army he returned to his job at the sawmill. He then worked there for many years.

In 1924 Mr Smith married Norah Agnes Moore, in the first wedding celebrated in the Beerwah Church of England. Mr Gordon Palmer gave the bride away and the wedding march was played by his wife.

The deceased is survived by his wife and five children – Gloria (Carbrook), Donald (Beerwah), Douglas (Carbrook), Ormonde (Beerwah), and Victor (Cairns). One daughter died some time ago.

Victor Smith was buried in the Beerwah cemetery amid the pine plantations where, in his youth, he felled timber to make way for pine plantings. 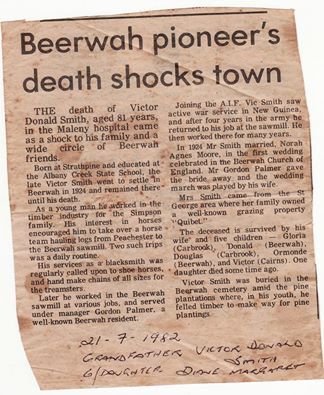 Editors Note: This article was submitted by a subscriber to the Beerwah Facebook Page http://www.facebook.com/Beerwah

We welcome all Letters to the Editor and do our best to publish all news and information sent to us.

Meet Teghan from Peachester who is doing some great things in the Performing Arts in Peachester and in the Glass House Mountains, … END_OF_DOCUMENT_TOKEN_TO_BE_REPLACED

Julie from V8 Supercuts in Beerwah Julie cutting hair early on Saturday Morning.  Although Jules has been cutting hair in Beerwah for … END_OF_DOCUMENT_TOKEN_TO_BE_REPLACED

Beerwah.com is always looking for new and fresh content. … END_OF_DOCUMENT_TOKEN_TO_BE_REPLACED

How to Promote your business and information You can … END_OF_DOCUMENT_TOKEN_TO_BE_REPLACED

What should we write about next? You might have noticed … END_OF_DOCUMENT_TOKEN_TO_BE_REPLACED